...because one of the reasons folks don't care for them is the lack of a tripod mount on this heavy lens. Optically, it's very nice, especially considering the bargain prices you can pick them up for. I looked into work-arounds for the lack of tripod mount and found an expensive (and discontinued) telephoto lens support bracket from Kirk and a similar device from Photoclam and Manfrotto.

I was ready to purchase the Manfrotto device and stumbled across a set-up from the Chinese company, Neewer, for less than a third the price of the Manfrotto. Considering I would use it infrequently (probably more like "rarely") and the thing had good reviews, I thought I'd take a chance. I could always return it if I wasn't pleased.

It came today and I set it up with my D750 w/battery grip and my old AF 80-200mm f/2.8 ED push-pull on my tripod. Rock solid. I love it. Fifty bucks. If you've been thinking about a Nikkor 80-200 f/2.8 but the cost was an issue, you might want to consider an old push-pull version and one of these inexpensive support brackets. It looks a little Rube Goldberg-ish but works very well. A bonus is that the device is modular and you can alter it if needed or use the parts and pieces for other projects. 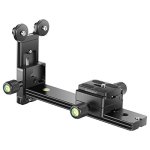